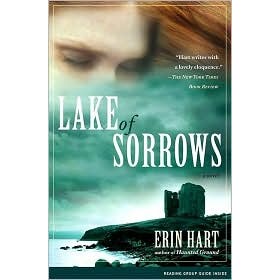 A magnificent tale of death and destiny, past and present, in an Ireland rich with tradition, myth, and mystery.

Death hangs heavy in the disturbed air of Ireland's lonely Loughnabrone peat bog, an ancient holy place, steeped in legend, drowned in sorrow, and long since abandoned by man. Pathologist Nora Gavin has been called to an archaeological site in the bleak midlands west of Dublin—a place known as the LAKE OF SORROWS—to assist at an excavation where a well-preserved Iron Age body has been found in a bog.

But moments after her arrival a much more recent victim is discovered. Like the ancient body, the new corpse bears multiple wounds, suggesting the ghastly ritual sacrifice of Ireland's blood-soaked pagan past. How many hundreds or thousands of years ago was the man killed? Was his a ritual death, some kind of sacrifice? These academic questions are intriguing, but of much more urgent interest is the second body found nearby—of a man wearing a wristwatch, hardly an Iron Age accessory. But his corpse does show strange similarities to that of his ancient counterpart. Both bodies bear signs of "triple death," a primitive practice in which a victim was ritually slain three ways, perhaps to appease some pagan trinity.

Nora and archaeologist Cormac Maguire, embroiled in a tumultuous love affair, must team up again professionally, and are soon enmeshed in the web of tangled desires and terrible secrets that surround this untimely death. The danger mounts, fueled by illicit liaisons, rumors of ancient gold, and one person's thirst for vengeance. Nora and Cormac must tread carefully, for as they draw closer to the truth, they come ever nearer to becoming the next victims of a ruthless killer. A magnificent follow-up to a sensational debut, LAKE OF SORROWS again weaves together history, folklore, and forensics, conjuring the dark character of the Irish countryside in a complex and chilling thriller.